The only member of the genus Talpa in the British Isles, the mole has some fascinating common names, including 'Mouldiwarp' (literally ’earth thrower’) and 'umpty-tumpt'.  In welsh, it is known as ‘twrch daear’ which means ‘earth hog’.

The mole’s short, black, velvety fur and broad, spade-like forelimbs make it instantly recognisable.  Although it has no obvious ears and minute eyes, it is neither deaf nor blind. Moles are usually between 11 & 16cm long, with a short tail and weigh between 70 & 130g; males are generally larger.

In the UK, the European Mole is found throughout mainland Britain, but is absent from Ireland and the majority of the small islands. It is a highly adaptable species and can thrive at elevations up to 1000m, wherever the soil is well-drained and deep enough for tunnelling; they are most abundant in permanent pasture and deciduous woodland.

Being an insectivore a mole’s diet entirely consists of invertebrates, usually collected from their tunnels, especially earthworms and insect larvae. This includes pest species such as leatherjackets, cockchafers and carrot flies; they will also eat slugs  if they come across them.

Adult moles are active day and night, alternating 3-4 hour bursts of activity with similar periods of rest; mature males may leave their nests for days at a time, sleeping in the tunnel system. Lactating females return to their nests 4 to 6 times in 24 hours to feed their 3-4 young, which are born in the spring. At birth, moles are naked and weigh as little as 3.5g. By 5-6 weeks of age they disperse above ground to establish their own territories; it is at this time that they are most vulnerable to predation by birds of prey, small carnivores (such stoats & weasels), foxes and cats.

Mole emerging from molehill; image by Ralf Siebeck from Pixabay

Moles spend almost their entire lives in tunnels that they dig themselves, which are found at depths varying from immediately below the surface to 70cm or more.  Loose soil is pushed up a shaft to the surface, forming a molehill. The main purpose of the sometimes vast tunnel system is to create a giant underground trap for invertebrates, so once a mole has set up a territory, it does not need to dig many more new tunnels.  The exception to this is when they are searching for the opposite sex, usually between March and May; they are territorial and so will not share their tunnel system with another mole.

This means that unless the resident mole has to repair collapsed tunnels or extend them to compensate for flooding, there are generally two peaks of molehill formation; during the springtime search for mates and whilst the young are dispersing in the autumn.  Once a mole has created a series of tunnels, there is very little visible activity at the surface.

Moles were once highly prized for their fur, which can lay in any direction and is waterproof. By the turn of the 20th Century more than 1 million skins were being sold each year in London, with 12 million exported to the US!

Now moles are generally considered an agricultural pest species. Contamination of the grass crop by soil may lead to poor quality silage and there is also a risk of damage to machinery and stock health. Mole runs may disturb roots and adversely affect plant growth and molehills can also degrade pasture by providing ideal seed beds for vigorous weed species. In gardens and amenity areas, molehills and tunnels can be a nuisance.

The use of strychnine to kill moles was banned in August 2006, due to the risk of killing non-target species which also feed on earthworms. A 2007 study by WildCRU found that the most popular method of mole control was kill-trapping. The results also suggested that more control may occur than is justified, either economically or potentially ethically. Control efforts peaked in spring, a time at which WildCRU's previous research showed breeding males were more likely to be caught; where control is necessary, it could therefore be more effectively targeted for population control. The most effective time to control mole numbers is from October to April, when they are most actively digging new tunnels and before the breeding season.

On this page, we consider the non-lethal options for mole control, as well as possible deterrants.

The most effective non-lethal method of ‘control’ is actually to leave the moles alone!

Since moles are territorial, removing one from a suitable habitat will leave it open to re-colonisation by another and the incomer is likely to do more digging, forming more molehills. The effectiveness of most control methods are questionable, as moles often shut up a tunnel that contains a trap or deterrant and tunnel round it, making more hills.

If undisturbed, moles are less likely to dig new tunnels, so why not try and live with them and remove molehills as they appear; you can use the fine soil on the garden. Moles are actually a gardener’s friend; they eat harmful insect larvae like leatherjackets, cockchafers and carrot flies, while their tunnels help drain and aerate heavy soils. On a large scale, try harrowing then rolling fields as this may persuade the mole to dig elsewhere.

These are traps, available for about £10, which are placed in the mole’s tunnel and catch the animal alive.  Traps should be checked at least twice daily, or the mole could starve to death. However, the use of these traps is not recommended since the relocated mole could suffer considerable survival pressure if released into either an occupied territory or sub-optimal habitat; also as mentioned before, a new mole will probably move in, causing more molehill formation. If you do decide to use this method, moles should be taken at least one mile away to deciduous woodland or other suitable uncultivated areas; try to pick an area without molehills.

None of the following methods have proven effectiveness, but may be worth a try if you really find tolerating the mole’s activity difficult.

Ultrasonic mole repellents are widely available (approx £20+); these are placed in the ground and send out ultrasonic sound waves which moles are supposed to find unpleasant.  For a homemade version, try sinking a child’s windmill or glass milk bottle with the open end exposed in a mole tunnel and this will produce a similar sound when the wind blows.

If the molehills are popping up in a garden flower bed, why not try planting a mole repellent plant? Caper Spurge (Euphorbia lathyris) and Stinking Hellebore (Hellebore foetidus) are reported as being repellent to moles. You could always try popping garlic or elder twigs into the molehills too! 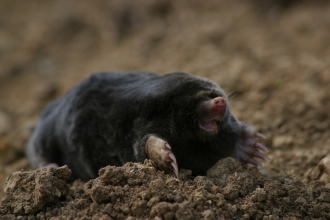 This stocky, brown mammal spends its life burrowing underground with its spade-like paws, hunting for earthworms to eat. 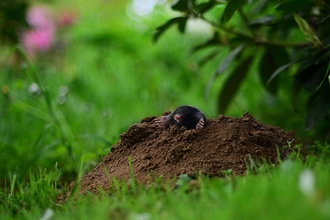 If you see a mole or molehills, please report it! This information is just as important as a reporting sightings of rare animals. 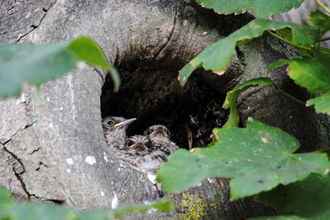