The Cors Dyfi Beavers are here!

After many months of planning and discussions Montgomeryshire Wildlife Trust have been granted a licence to release Eurasian beavers Castor fiber into an enclosure at Cors Dyfi Nature Reserve and on Friday 26th March the beavers finally arrived.

Today, Cors Dyfi is a lowland peat bog – an extremely important habitat in Wales – but the reserve was once used as a conifer plantation. Due to the difficult residual terrain of former forestry ditches and tree stumps, managing areas of the reserve using traditional methods, such as coppicing by hand, is all-but impossible. Over the years, Montgomeryshire Wildlife Trust have therefore been considering a range of alternative management options, including water buffalo. In more recent years, beavers – often referred to as ‘ecosystem engineers’ and well known for their amazing ability to manage wetland habitats – have come to the fore as an ideal solution.

Beavers are large, semi-aquatic rodents that live within wetland and river habitats. They are herbivores and feed on a wide range of plant species and through their foraging, burrowing and damming activities, they can restore wetland areas, which benefit many other species, so increasing biodiversity.

On Friday (26th March), the first part of a family group, a father and son, arrived and were released by Iolo Williams, Naturalist and Television Presenter, into a secure enclosure that has been purpose built on the reserve. This family is quite special, as the father is a much rarer, black morph individual, with entirely black fur, his son has a brown pelt with patches of darker fur that can be seen in certain light. The mother will follow soon and re-join her family in a few weeks. 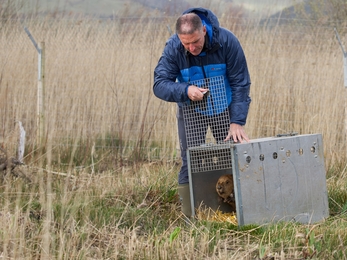 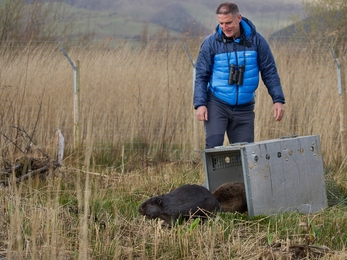 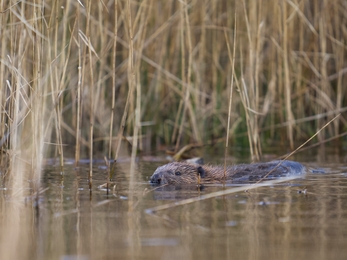 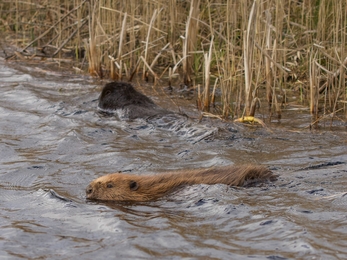 For the last two years, the Welsh Beaver Project, led by North Wales Wildlife Trust on behalf of all the Wildlife Trusts in Wales, have been assisting Montgomeryshire Wildlife Trust with their plans by applying for a licence to release beavers on site and funding an enclosure. A public consultation was held by Natural Resources Wales (NRW) last autumn and a licence was issued earlier this month.

The beavers for the enclosure have been sourced from Scotland, under licence from NatureScot. Dr Roisin Campbell-Palmer, field biologist and beaver expert, works to relocate beavers from conflict sites in parts of Scotland, working closely with landowners predominantly in the farming sector, to offer an alternative to lethal control. All beavers are trapped and translocated according to best animal welfare practices and undergo health screening at a purpose-built facility at Five Sisters Zoo, West Calder.

This project has received funding through the Welsh Government Rural Communities - Rural Development Programme 2014-2020, which is funded by the European Agricultural Fund for Rural Development and the Welsh Government. Although not a reintroduction to the wild, having beavers at a visitor hub like Cors Dyfi will help to inform people about their behaviour and how their natural activity can actively support ecosystem restoration. The beavers and habitat will be regularly monitored by Wildlife Trust staff and volunteers. Montgomeryshire Wildlife Trust and the Welsh Beaver Project are really excited to welcome the new beaver family and look forward to seeing what the beavers will get up to on the reserve.

The Welsh Beaver Project has been investigating the feasibility of reintroducing Eurasian beaver into the wild since 2005. Proposals are currently being developed and in due course there will be another, separate public consultation led by NRW for the reintroduction of beavers into the wild.

The find out more about the Welsh Beaver Project and for updates on the Cors Dyfi beavers visit our project web page.

The beavers will be a fantastic tool in our efforts to return Cors Dyfi into a wet lowland peat bog once again. Our volunteers are really excited to have beavers at the reserve and it will be their job to monitor the beavers and measure the positive impacts of these mammals.
Emyr Evans, Dyfi Projects Manager
Montgomeryshire Wildlife Trust

Five Sisters Zoo and Dr Roisin Campbell-Palmer, Field Biologist and Beaver Expert:
“We are very happy to be involved in moving animals to high quality fully licensed beaver projects in which their natural behaviours are encouraged.”

Jenny Bryce, NatureScot Wildlife Ecology Manager: “We’re very pleased to be able to help with this project by licensing the trapping and moving of beavers from Scotland to Cors Dyfi nature reserve in Wales. Beavers can have hugely positive impacts on nature and people, creating habitats such as ponds and wetlands where other species thrive, as well as moderating water flows and improving water quality. We wish the Montgomeryshire Wildlife Trust every success and look forward to supporting similar projects elsewhere to realise the many benefits that beavers can provide.”

Iolo Williams, Naturalist and Television Presenter:
“It was a real honour to be asked to help release the beavers at Cors Dyfi. Finally, after more than 4 centuries, these wonderful animals are back where they belong and I’m sure they will prove to be as big an attraction as their osprey neighbours.”
Alicia Leow-Dyke, Welsh Beaver Project Officer, Wildlife Trusts Wales says:
“It is wonderful to finally see beavers at Cors Dyfi nature reserve, where people can visit and learn more about the many benefits beavers can bring. We hope this will help bolster support for a managed reintroduction to the wild in the near future.”

Following the success of Montgomeryshire Wildlife Trust’s appeal to save the Pearl-bordered Fritillary butterfly last December – ‘PBF: A…

Llanfair Caereinion Town Council has received over £60,000 from the Heritage Lottery Fund for an exciting project - Llanfair Community…

Elusive and rare, the Bittern is on the wish list for many a wildlife enthusiast. Yet, despite their large size, they are very hard to…